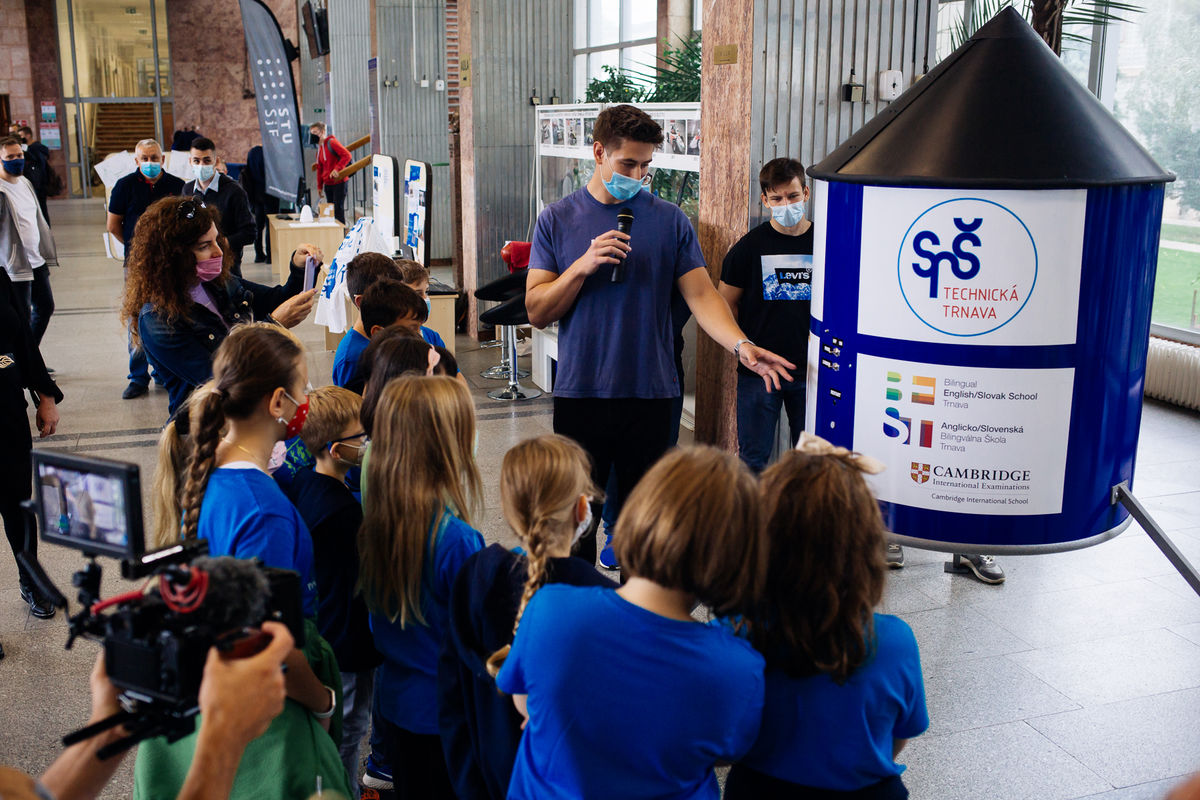 Photo: Renáta Černayová – The travel rocket that will transport them to four places on Earth.

The MyMachine Expo at the Faculty of Mechanical Engineering of the Slovak University of Technology in Bratislava united all primary, secondary, and higher education students to test the prototypes. “Today, robots are used not only in production, services and transport but also in the kitchen, for example. You all also designed some robots,” said the dean of the Faculty of Mechanical Engineering STU Ľubomír Šooš to the children. He admires all the creators and is convinced that even among the students who participate in MyMachine Slovakia are innovators and, for example, future designers.

Amazing dream machines were invented, like the travelling machine that allows you to fly to Paris, London, New York or Shanghai. For the traveller to feel that he got where he wanted, a surprise awaits her/him inside. “Lithographic images from the selected city will light up,” explains one of the designers, student Daniel Tóth. “Production took several months, and it was longer than we wanted,” he said. In the end, however, they were successful.

Other ideas are the 3D printer printing chocolate. Students of the Secondary Industrial School of Mechanical and Electrical Engineering in Komárno turned the dream into reality. The authors of the technical university say that modifying the 3D printer so that it does not print plastic, but the chocolate, was their credit task. The production took about 200 hours. Among the students who came to see the inventions, the chocolate printer was the most successful.

Or how about the idea of ​​students from the Bratislava International School Brilliant Stars to simplify everyday life. “The children said they would want a robot that brushed their teeth because they were lazy to do it themselves. So we invented a helmet for cleaning teeth, on which a brush is mounted, and the child can control it with a joystick, “says one of the authors of the third invention Samuel Jankove from the Faculty of Mechanical Engineering STU. They collaborated with students from the Karol Adler Secondary Industrial School of Electrical Engineering in Bratislava.

Obviously, MyMachine is not about creating prototypes. It’s all about building Creative Confidence. Showing all students involved that their ideas matter! That their ideas can make a difference! And that you can bring any idea to life by collaborating, respecting each other’s talents, being persistent and resilient. Thank you so much to all students involved, their educators and the MyMachine Slovakia team!

A whole lot of new ideas popping up in Slovakia!

This website uses necessary cookies to improve your experience while you navigate through the website. These are stored on your browser as they are essential for the working of basic functionalities of the website. As we don't use third-party cookies, you can see these listed here as "Disabled".

Read more on our Privacy Policy
Necessary Always Enabled
Necessary cookies are absolutely essential for the website to function properly. This category only includes cookies that ensures basic functionalities and security features of the website. These cookies do not store any personal information.
Non-necessary
Any cookies that may not be particularly necessary for the website to function and is used specifically to collect user personal data via analytics, ads, other embedded contents are termed as non-necessary cookies. It is mandatory to procure user consent prior to running these cookies on your website.
Functional
Functional cookies help to perform certain functionalities like sharing the content of the website on social media platforms, collect feedbacks, and other third-party features.
Performance
Performance cookies are used to understand and analyze the key performance indexes of the website which helps in delivering a better user experience for the visitors.
Analytics
Analytical cookies are used to understand how visitors interact with the website. These cookies help provide information on metrics the number of visitors, bounce rate, traffic source, etc.
Advertisement
Advertisement cookies are used to provide visitors with relevant ads and marketing campaigns. These cookies track visitors across websites and collect information to provide customized ads.
Others
Other uncategorized cookies are those that are being analyzed and have not been classified into a category as yet.
SAVE & ACCEPT